In an Iraqi village, a little girl hides skin disease from neighbours

AFP / Haidar HAMDANIHaura, a four-year-old Iraqi girl with a rare congenital skin condition that covers much of her upper body in black marks and hair, stands in front of her mother in the family home in Wahed Haziran, Diwaniya province, on April 17, 2018. Photo by Haidar Hamdani.

Four-year-old Iraqi girl Haura should be enjoying her childhood — games in the street, tearing in and out of friends’ homes and small squabbles over toys.

Instead, a rare congenital skin condition covering much of her upper body in black marks and hair has made her the object of ridicule in her village, about 200 kilometres (120 miles) south of Baghdad.

Everyday, Haura’s parents dress her in long sleeved shirts and high collars, but it’s a losing battle — her neck gives her away, to laughter and jeers.

“In two years, she will have to go to school — we really dread that”, says Haura’s mother Alia Khafif at the family home, in Wahed Haziran, Diwaniya province.

“How will the other children behave with her? We can’t guarantee that she’ll be comfortable in a school and this is the biggest obstacle for her future”, sighs Khafif, dressed in a traditional long black veil.

The black marks and hair cover Haura’s shoulders and almost her entire back, along with much of her arms and neck.

But things could still get a lot worse.

Her condition, a giant form of naevus — birthmarks or moles — make her highly vulnerable to malignant melanoma, the most dangerous skin cancer.

To ward off a potentially “fatal” outcome, the best treatments would be a skin graft and laser sessions, dermatologist Aqil al-Khaldi tells AFP. He also recommends psychological help.

Iraq’s medical system has been destroyed by the 15 years of chaos that has followed the toppling in 2003 of dictator Saddam Hussein, and by more than a decade of sanctions before that.

“We have seen several doctors and they all told us that she cannot be treated in Iraq. They all say we have to go to a specialist centre abroad,” says Haura’s mother.

“We cannot afford the journey or medical costs.”

Even treatment to alleviate itching is beyond the family’s reach — and the irritation gets worse with the Summer heat, as temperatures regularly exceed 50 Celsius (120 Fahrenheit).

“What we have is barely enough to live on and to send four brothers and sisters to school,” adds Khafif, whose husband is old, sick and unemployed.

Haura’s teenage brother Ahmad stands up for her.

“She’s a normal child, there’s nothing wrong with her,” he insists.

AFP / Haidar HAMDANIHaura, a four-year-old Iraqi girl with a rare congenital skin condition, stands in the doorway of her family home. The condition, a giant form of naevus — birthmarks or moles — makes her highly vulnerable to malignant melanoma, the most dangerous skin cancer. Photo by Haidar Hamdani.

“But when she leaves the house, our neighbours laugh at her.”

Outside in the street, passing children avoid her like the plague.

“Even if the Prophet asks us, we won’t play with her”, one says.

So when her siblings head to school, Haura sits and plays on her own — or peers mournfully into a little green-framed mirror, held up close to show only her big brown eyes and pretty face. 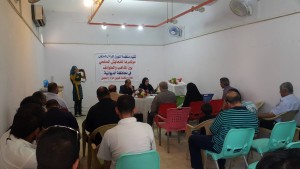